Skip to content Skip to navigation
See our Campus Ready site for the most up to date information about instruction.Campus ReadyCOVID Help
Quantitative and Systems Biology 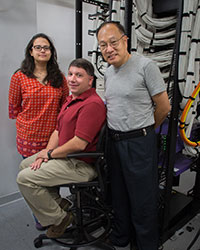 A new supercomputer assembled on campus this summer is the first step toward making UC Merced a computational training ground for researchers throughout the Central Valley.

“We can do extraordinarily diverse research with this computer, from quantum mechanics to the topology of ancient China,” quantum chemistry Professor Hrant Hratchian said.

Hratchian and his fellow principal investigators — mathematical biology Professor Suzanne Sindi, who, like Hratchian, is with the School of Natural Sciences, and mechanical engineering Professor Jian-Qiao Sun, with the School of Engineering — applied for the $600,000-plus National Science Foundation (NSF) grant to buy the computer built by Advanced Clustering Technologies.

That money purchased what is essentially the supercomputing starter kit — a cluster of nodes, each featuring different kinds of computing architecture. The new computer even has a name: the Multi-Environment Research Computer for Exploration and Discovery, or MERCED.

MERCED’s structure means the computer is expanded and updated as researchers purchase nodes that are specific to their work.

“Each node makes the machine that much bigger,” Sindi said. “It increases our capacity without buying a whole new machine.”

Nodes can run between $6,000 and $25,000, and Hratchian said researchers across campus are encouraged to include the costs for new computing nodes in their grant proposals.

So far, about 40 percent of the computing power has been purchased. There are 33 active nodes with 20 high-speed processing cores that can do 14 trillion functions each second.

The system has drawn the interest of researchers from all three schools.

Sindi, Hratchian and Sun formed a committee that includes faculty members from all three schools to guide the intelligent growth of centralized research computing at UC Merced. An educational component of the grant proposal calls for training researchers from the University of the Pacific and California State University, Stanislaus.

“It’s a great opportunity for the students from those universities to use this regional resource,” Sindi said. “They’ll get to do research in ways they wouldn’t otherwise have access to.”

The professors plan to hold workshops and training sessions on how to use the computer starting this fall.

The supercomputing center, housed in the Science and Engineering 2 Building, also features a desktop setup with graphic processing units that can complete “a phenomenal number” of parallel functions, which is a system Sun said he has long dreamed of.

“Twenty or 30 years ago, all of this was science fiction,” he said. “But now, using supercomputers to advance research is just a fact of life.”