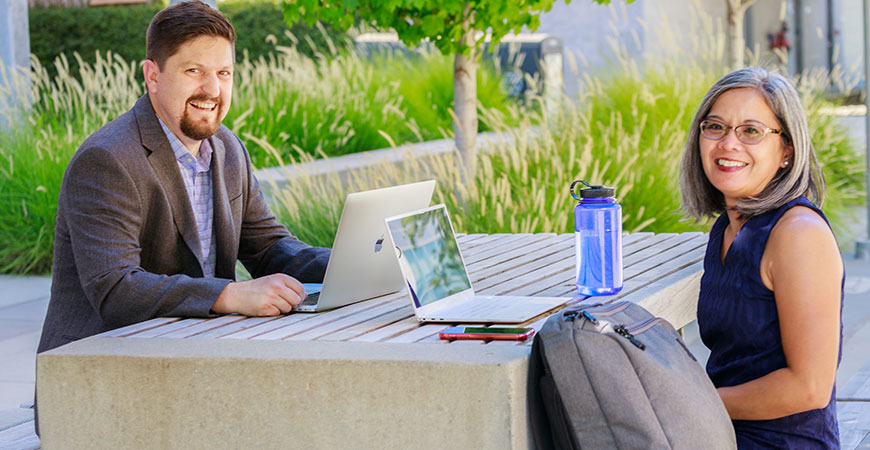 Maybe now more than ever, scientists need to understand the immune system.

A new National Institutes of Health grant is funding a cross-disciplinary collaboration between bioengineering Professor Joel Spencer and immunology Professor Jennifer Manilay that will allow them to watch as immune-system cells develop in the bone marrow of a living mouse to gain insights into how they work.

“We want to understand how B cells — one of the main lines of defense against pathogens — develop and interact with other cells as they develop and help produce antibodies,” Manilay said. “Joel has developed a way to watch these cells in real time, like a movie.”

The research could eventually lead to understanding possible side effects of treatments for osteoporosis, improve bone marrow transplants to enhance positive responses to chemotherapy, and treatments for aplastic anemia, an autoimmune disease in which the body fails to produce blood cells in sufficient numbers.

Spencer, who joined the campus in 2017, was pleased to discover that he and Manilay share common research interests. Both study bone marrow, but from different angles. Spencer’s research focuses on biomedical imaging, and he became the first scientist to capture an image of native hematopoietic stem cells (HSC) within the bone marrow of a living organism. Manilay is interested in the relationship between bone and bone marrow’s HSCs on immune cells’ fates.

“Our areas of expertise can be very complimentary,” Spencer said. “We want to provide new information on the microenvironments supporting B cell development and function and learn how bone physiology affects immune system cells.”

The researchers will look at the bones of mice that have been modified to turn off, or knock out, the VHL gene in bone cells. This gene controls cells’ response to different oxygen levels, especially low levels.

One of the effects of a VHL gene defect is that the bones grow extremely dense, with little room for marrow. As marrow is where both immune system and blood cells develop, less marrow than normal could have a wide range of negative consequences. The team wants to know whether immune cells are responding to altered oxygen conditions, which are also a hallmark of the defect.

B cells can sense when they are in low-oxygen conditions, Spencer said, and they turn on other cells that help them adapt.

“Something happens in the environment around the B cells and we need to understand that,” he said.

“Are the B cells responding to altered oxygen levels in the marrow caused by overgrowth of the bones?” Manilay asked.

They plan to precisely measure oxygen levels inside the thickened bones using a method Spencer developed. By transplanting bone marrow that fluoresces, the team will be able to look at B cells to see what they are doing, how many there are, if and how they are moving and which cells they are interacting with, Manilay said.

The defect is acquired and sets in as the mice age, and she said the two-year study will allow the team to visualize the marrow in the same mice, but at different ages.

Both researchers are affiliated with the Health Sciences Research Institute. Spencer, with the Department of Bioengineering in the School of Engineering, and Manilay, with the Department of Molecular and Cell Biology in the School of Natural Sciences, have been working on the foundation of this research for more than a year. This has given their graduate students the opportunity to collaborate to analyze data and cross-train in each other’s disciplines. Both researchers take seriously the calls to train future scientists and to increase diversity and inclusion in the science, technology, engineering and math fields.

“UC Merced has a highly diverse undergraduate population — less so at the graduate level, but that is changing,” School of Engineering Dean Mark Matsumoto said. “Through the undergraduate research efforts of faculty and grant opportunities like this one, we are gradually expanding the diversity of the STEM workforce, particularly those with advanced degrees. Diversity in research adds perspectives that are often overlooked.”

Like many UC Merced researchers, Manilay and Spencer said they are happy to contribute work that will help the university reach R1 research status as soon as possible. In early 2016, UC Merced was designated a “doctoral-granting university with higher research activity” — or R2, the second-highest classification for American research universities — in its first appearance on the highly cited Carnegie Classification of Institutions of Higher Education. Reaching R1 designation is a major focus for the campus, and to get there, the Carnegie Commission on Higher Education must see “very high research activity” demonstrated.

“This work exemplifies the creativity and innovation that can be unlocked through cross-disciplinary collaborations,” School of Natural Sciences Dean Betsy Dumont said. “It is basic science at its best and has potentially profound clinical implications. The more we can help faculty secure grants like this, the more quickly we will achieve R1 status.”