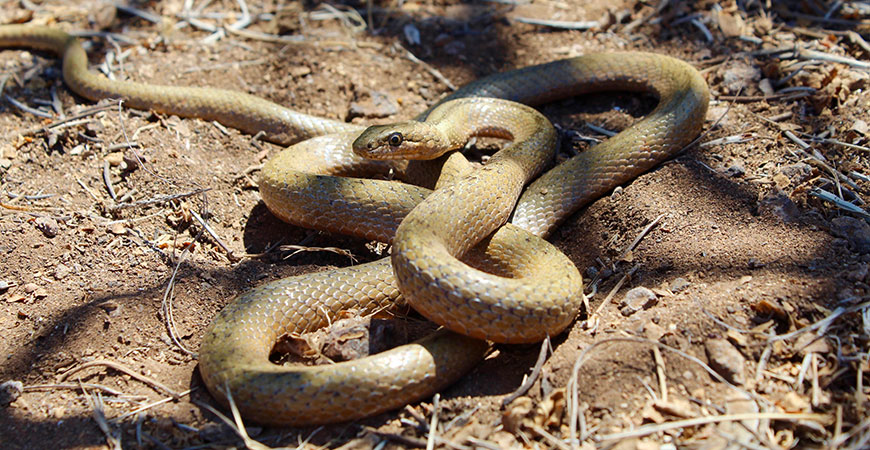 It has been 186 years since Charles Darwin collected the samples of the Galapagos Islands species that led to his explanation of how the diversity of life on Earth has evolved and forever changed the way we understand the world.

During his five-week stay on the islands, Darwin collected dozens of samples, including one small, light brownish-grey snake on Floreana Island. That sample, now at the Natural History Museum in London, was the basis for describing a new species, the Galapagos (Floreana) racer.

“We want to effect ecosystem restoration on Floreana Island by finding an evolutionary replacement in the ecosystem for that species. To do this, we will sequence Darwin's specimen to understand the identity of the specimen relative to the populations present on other islands. We can then use the closest genetic relative to repopulate Floreana Island with this key predator,” Edwards said. "We will also use this dataset to understand the extent of species diversity across the archipelago with the most extensive sampling to date."

Anecdotally, racer snakes have fallen prey to cats and other invasive species across the islands. Edwards and her team will use genetic data gathered from samples collected by Galapagos National Park and many international collaborators, along with specimens from museums, to assess population size changes in racer populations and see if populations are in decline, or stable, informing future conservation management efforts by the Galapagos National Park.

“It’s a huge effort, involving an international team of collaborators, and we do not yet know if we will be able to get DNA from the specimen Darwin collected,” Edwards said. “But we won’t know unless we try, and results from other similar studies on museum specimens have shown promising results.”

The Galapagos is a prime place to undertake conservation and rewilding research, because the park has an extensive record of incorporating rigorous science into practices with many partner organizations, she said.

Edwards will lead a team — including colleagues from the United States, United Kingdom, Ecuador and New Zealand, and the Galapagos National Park and Island Conservation — to develop the project. They have been collecting samples for the past five years to try and identify novel species on the islands and expand sampling to include all known islands and islets where snakes occur.

“The findings of this research will provide a detailed picture of how snakes evolved across the islands. The snakes are the last reptile group to have their historical movements across the islands studied. They are believed to be the most mobile of the terrestrial vertebrates and are therefore more likely to provide insights into connections among islands,” Edwards said. “This project will also provide a source population for Floreana rewilding and a detailed assessment of the genetic health of snake populations across the islands.”

Edwards, who joined the Department of Life and Environmental Sciences in the School of Natural Sciences in 2015, focuses most of her research on how the environment impacts the evolution of ecological niche, phenotype and behavior in reptiles, mostly in the context of how these changes lead to the development of new species. She applies this research to inform conservation management strategies for endangered and vulnerable reptiles and amphibians.

But this isn’t her first genetics project in the Galapagos. In 2015, a team she was part of revealed that it had identified a novel species of Galapagos giant tortoise. Edwards conducted much of the population genetics analyses, using repeat fingerprinting markers like those used in forensic research, that let the team distinguish between two closely related species. She has been involved in projects in the Galapagos and Australia, applying genomic techniques to understanding biodiversity and implementing conservation management over the past 20 years.

“Working in the Galapagos is a dream come true for an evolutionary biologist, herpetologist and conservation biologist,” she said. “I feel privileged and excited to work on a project based in the crucible of evolutionary thought with a specimen Darwin himself collected.”