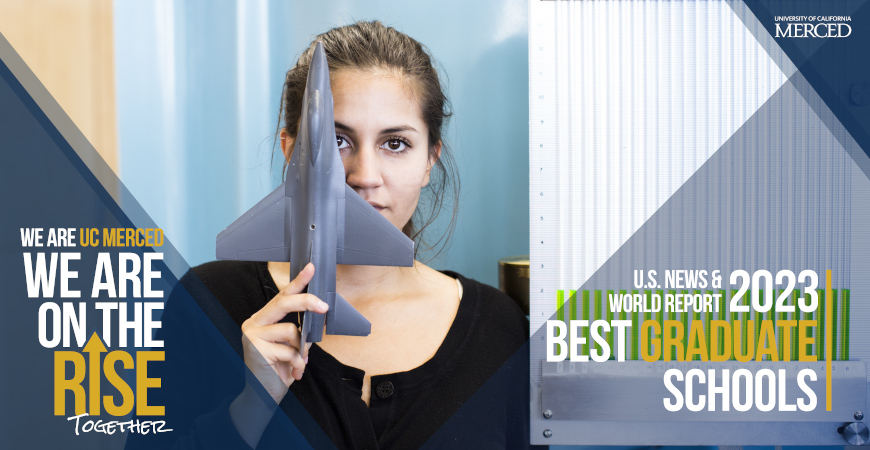 Twelve of UC Merced’s graduate programs and one of its schools are among the best in the country in the U.S. News & World Report 2023 Best Graduate Schools rankings, according to results released March 29.

“It is exciting to see that our graduate programs continue to gain national recognition; it is a testament to the impact of our faculty in teaching and research,” interim Vice Provost and Graduate Dean Chris Kello said. “Our rankings progress shows our growing reputation for offering graduate students exceptional opportunities for disciplinary and interdisciplinary research training.”

Four graduate programs in the School of Natural Sciences rose in the rankings. The largest jump is biological sciences (part of the Quantitative and Systems Biology (QSB) Graduate Group) ranked No. 144, up 31 spots from 175 last year. QSB is the campus’s largest graduate program.

“The impressive uptick in science program rankings is a testament to the hard work and focus of our faculty, students and staff,” School of Natural Sciences Dean Betsy Dumont said. “It is exciting to see these programs get the recognition they deserve, and I am certain that they will continue to rise further in the rankings with each passing year.”

Some recent SNS faculty highlights include 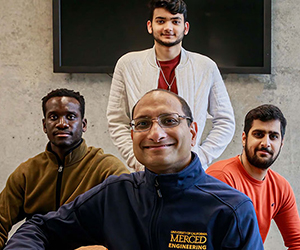 Professor Sachin Goyal, front, with several of his students.

“I am pleased that our graduate engineering programs in the School of Engineering continue to rise overall in the U.S. News and World Report rankings,” School of Engineering Dean Mark Matsumoto said. “This steady rise, from being unranked just a few years ago, is directly linked to the talent and tenacity of our faculty to pursue excellence.”

Faculty highlights for the School of Engineering include

UC Merced’s School of Social Sciences, Humanities and Arts (SSHA) made the rankings again with Psychology (Psychological Sciences Graduate Group) ranked No. 88, up from 90.

“We’re a new campus and there are hundreds of programs out there to compare us to, so our ranking in the top 100 is tremendous,” School of Social Sciences, Humanities and Arts Dean Jeffrey Gilger said about the program’s steady rise. “Psychological Sciences, one of the campus’s earliest ranked graduate programs, is quite a powerhouse and becoming more so over time. Health psychology and quantitative psychology are the largest stand-alone psychology programs in the UC system.”

Last year, the Political Science Graduate Group ranked No. 63 and the history discipline of the Interdisciplinary Humanities Graduate program ranked No.127. Gilger said he is confident more SSHA graduate programs will reach the national rankings soon.

U.S. News surveyed graduate programs at more than 2,100 schools that grant doctoral degrees, and the rankings are based on a variety of criteria.

U.S. News ranks business, education, engineering, law, nursing and medicine graduate programs annually, while other disciplines and specialties in the sciences, social sciences, humanities and other areas are ranked periodically.